HISTORY OF 3 SQUADRON IN MALAYSIA 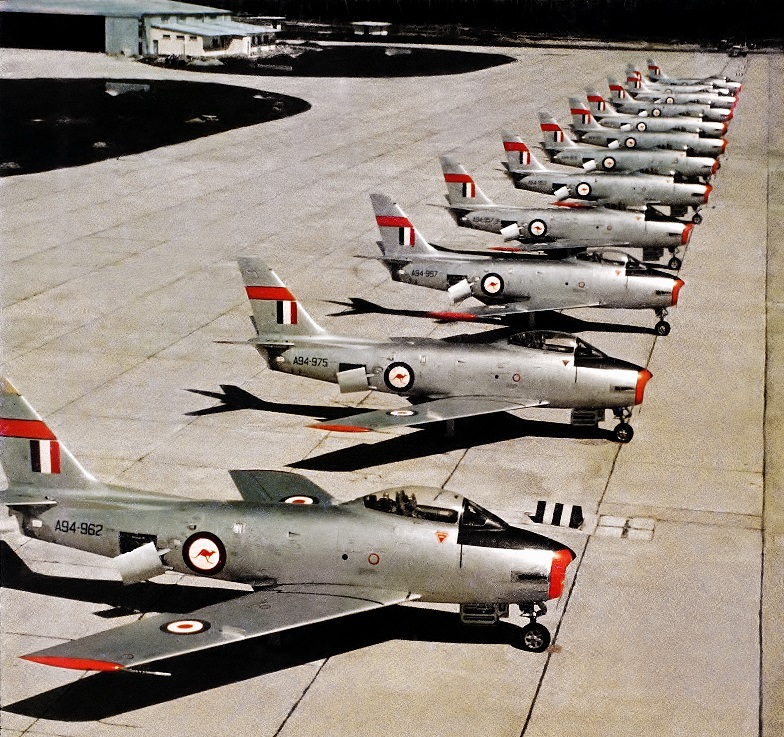 3SQN is one of the oldest squadrons in the world, and has a long and proud operational history.  Since the Squadron’s inception in 1916, it has served on the Western Front in WW1, and the Middle East, Africa and the Mediterranean in WW2.  Since then however, the operational history of 3SQN is thinly-documented and is somewhat unknown to most.  From 1958 to 1986, the squadron called the former RAAF Station Butterworth their home.  Its contributions in the Malayan Emergency and Indonesian Confrontation have since been recognised officially, and added to the battle honours on the 3SQN Colours.  This report serves to outline this operational service and highlight 3SQN’s involvement in Malaysia in the present day.

3SQN RAAF first deployed to Malaysia [then called "Malaya"] in October 1958, in support of Malayan forces and other Commonwealth units in their conflict with the military arm of the Malayan Communist Party.  The squadron flew the C.A.C.-manufactured Sabre, which had been acquired when the Squadron re-formed on 1 March 1956 after previous disbandment.  Under the command of WGCDR C. G. Thomas D.F.C, the squadron flew via Townsville, Darwin, Biak and Labuan before arriving in November.  It began training for their roles in the strategic reserves, usually involving ground-attack missions on covert jungle-covered communist targets.  The campaign was bolstered by Canberra bombers from 2SQN and more Sabre fighters from 77SQN. 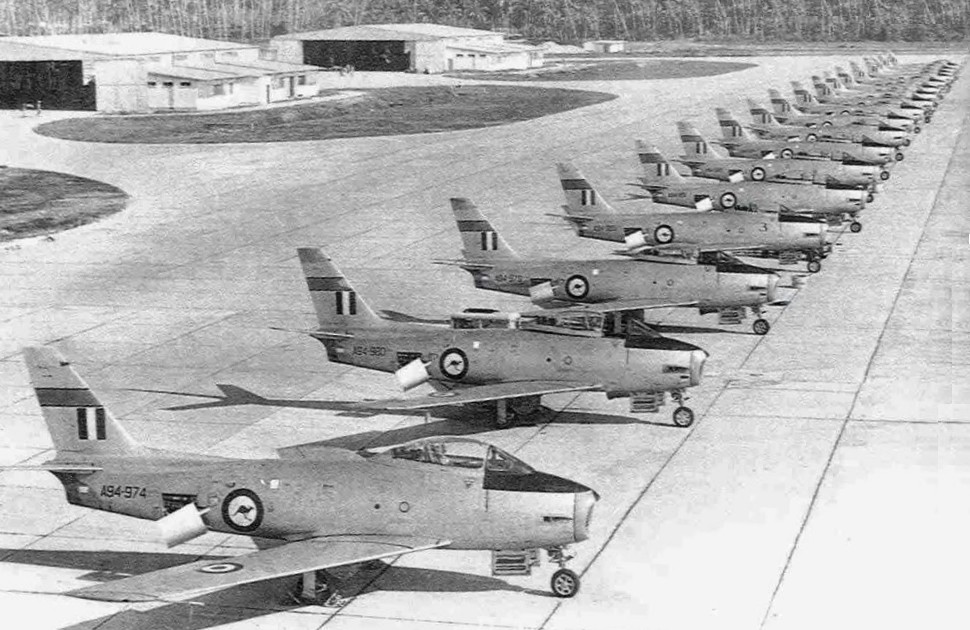 A very impressive line-up of eighteen 3 Squadron Sabres at Butterworth in March 1959 (marked with attractive black-bordered orange stripes on tail-fin, intake lip and wing- and tailplane tips).
Note that the fourth aircraft back has the small numeral "3" applied below the cockpit - this is a hangover from the Squadron decorative scheme used on some Sabres back in Australia.
A similar marking of "3 with orange sabre sword" was later applied to all the Squadron's aircraft, but larger and further back on the fuselage.   [Photo: FlyPast Collection.]

Due to the absence of air threats in the conflict, 3SQN became primarily a ground attack squadron, targeting communist guerrilla infrastructure in support of the Malayan and Commonwealth troop presence on the ground.  3SQN carried out its first operation against communist guerrillas on 13 August 1959.  In a joint bombing raid with 77SQN, six Sabres from each squadron took off with 500lb high-explosive bombs underwing, and destroyed three terrorist training camps.  Despite perfect coordination and execution of the attack, the raid did not achieve the objectives hoped for.  As one pilot described the target area after the attack:

3SQN and 77SQN conducted two more offensive strikes against terrorist camps in June 1960, one led by FLTLT Jake Newham.  [Later Air Marshal J. W. Newham AC, who served with several fighter squadrons in Korea, Malta, Malaysia and Australia.  He commanded 3SQN when it acquired the Mirage fighter and became Chief of Air Staff prior to his retirement in 1987.]

Another milestone set by 3SQN in 1960 was the first live-fire of an AIM-9 Sidewinder missile by FLTLT V. Oborn.

Despite this conflict being referred to only as an 'Emergency' and not 'Civil War' (due to bureaucratic motivation), the conditions and fighting on the ground were intense and very much war-like.  The Malayan Emergency officially ended in 1960, however tensions in the region remained high, and 3SQN remained at RAAF Butterworth.  It would only be three years before the Squadron’s services would once again be required by the developing Malaysian nation. 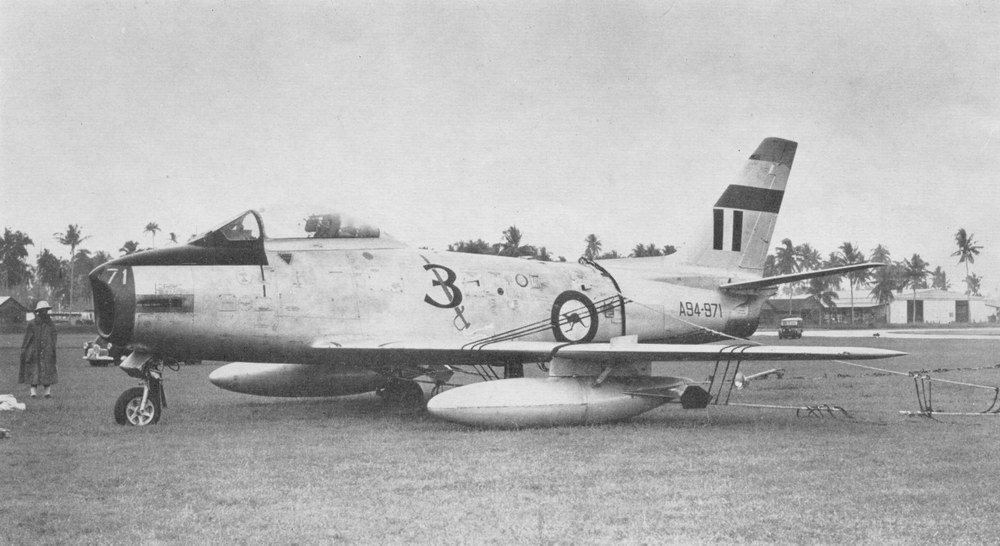 Sabre A94-971 collects the crash barrier at Butterworth.  From 1959 the Squadron's aircraft had a "3 with Sabre" (red sword) insignia added to the sides of the aircraft.
This was an era of regular airshow displays.  [Picture from ADF Serials]

Between 1963 and 1966, 3SQN provided air support to Malaysia during its standoff with Indonesia.  Malaysia was still a young nation, and had not developed any air power, and 3 and 77 SQN remained to deter and prosecute any Indonesian attack on the Malaysian peninsula.  After Indonesian aircraft dropped paratroopers on the Malaysian mainland and large scale riots erupted in Singapore, a state of emergency was declared. 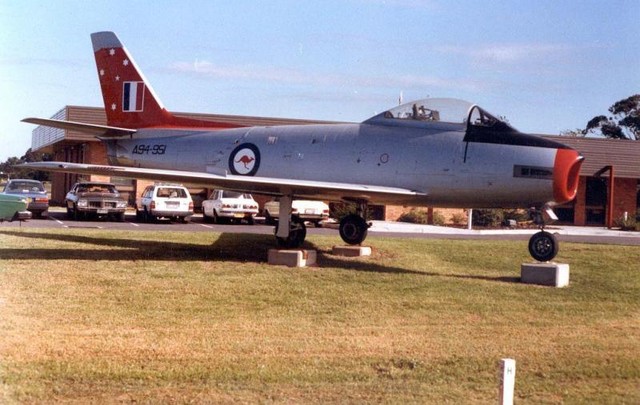 In 1962, 3SQN changed its markings to the very attractive "Jaffa Orange Tail with Southern Cross".
However, all bright 78 Wing markings (i.e. 3 and 77 Sqns at Butterworth) were removed in 1963 due to the Confrontation with Indonesia.
Also the Butterworth squadrons had to support 79 Sqn in Ubon, Thailand, so it was easier for all aircraft to be devoid of specific squadron markings.
[A94-951 is currently displayed in the "Fighter World" museum, Williamtown NSW.  Photo: ADF Serials]

From September 1963, the squadron provided two fully-armed Sabres on alert in response to the increased probability of attack from Indonesia.  This led to several scrambles by 3SQN crews between December 1963 and January 1964, however no action was taken as the Indonesian Mig-21 aircraft aborted prior to encroaching on the friendly airspace.  Further to this, 77SQN had four aircraft on similar 5-minute readiness, and the rest of the Squadron ready to launch within 1 hour.  On 7 September 1964, 3SQN moved six aircraft to RAF Base Changi in order to boost Commonwealth defence of Singapore, and the remaining members of the Squadron followed soon after.  An extra 15 aircraft and 52 ground crew were deployed from Australia to aid in maintaining a seven-day-a-week alert.  3SQN maintained this presence until tensions eased and a peace treaty was signed in 1966.

On 16 February 1967, the Squadron re-deployed to Australia in preparation for the acquisition of the new Mirage IIIO.  This ended over eight years of the Squadron being based in Malaysia and Singapore, however the Squadron’s stay in Australia would be short. 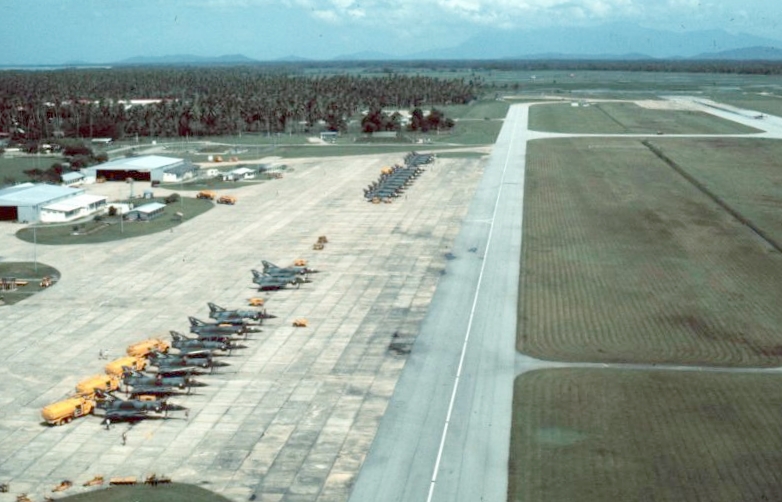 RAAF Mirages on the tarmac at Butterworth.

3SQN, equipped with new Mirage interceptor aircraft, redeployed to RAAF Butterworth in February 1969 to offer further support to the Royal Malaysian Air Force.  This was around the same time that Australian troops were being committed to the Vietnam War.  Over the next 15 years, 3SQN maintained a presence in the unstable region, protecting Malaysia and Singapore.  Regular attachments were sent to Tengah and Paya Lebah Air Force Base in Singapore in an effort to train the Singaporean Air Defence Forces. 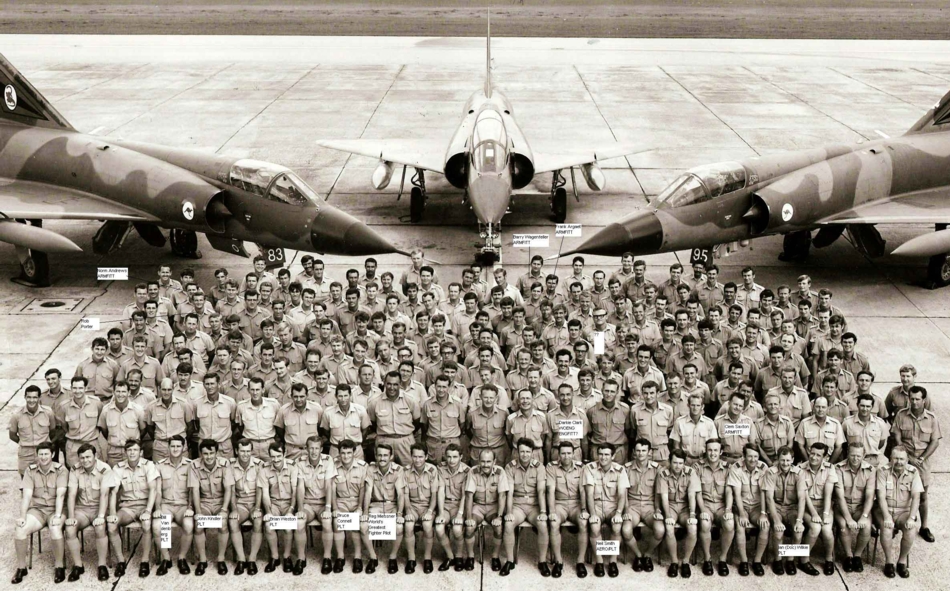 3 Squadron Personnel circa 1971.  Flanked by three Mirages - the camouflaged single-seaters are in the "Lizard" ground-attack
camouflage colours, and the Squadron tail-insignia features a Frill-Necked Lizard superimposed on a numeral "3".

During this period the 3SQN Mirages were affectionately referred to as the ‘lizards’ due to their low-level tactics and camouflage paint scheme.  The frill-neck lizard became the Squadron’s everyday insignia.  Fitted with Doppler navigation and a radar capable of ground mapping, the 3SQN Mirages became primarily ground-attack fighters. 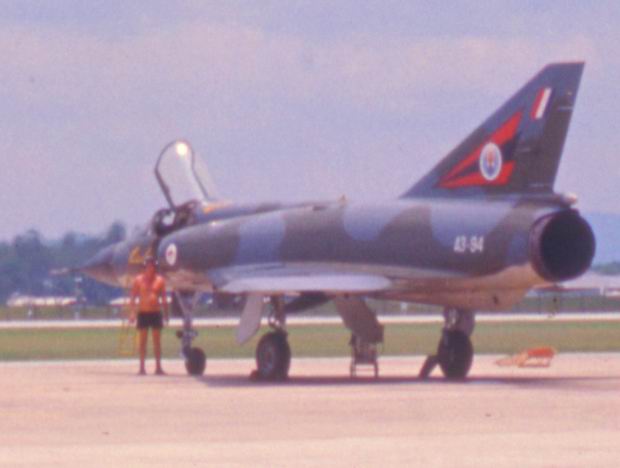 [On the 31st of March 1986, 3SQN's Mirages and the great majority of the Squadron's Butterworth personnel were transferred to 79 "Phoenix" Squadron RAAF, concluding 28 years of 3SQN Sabre and Mirage deployment in Malaysia and Singapore.  No.3 Squadron subsequently became the first RAAF squadron to receive operational F/A-18 Hornet aircraft, at Williamtown, NSW, on 29 August 1986.]

Australia is included as a member of the Five Powers Defence Arrangements with the United Kingdom, Malaysia, Singapore and New Zealand.  It was in accordance with this that the Integrated Air Defence System was established with the headquarters at Air Base Butterworth.  As a result, 3SQN is frequently included in multinational exercises like Bersama Padu which exercise this partnership, and requires us to return to the place where so much of our recent history was enacted.

Our operations in Malaysia since 1958 have been an achievement that 3SQN can be proud of.  Although not gaining the acclaim of our operations in WW1 and WW2, our involvement in the Malayan Emergency and Indonesian Confrontation have made an extremely important contribution to Commonwealth efforts in the region.  It is appropriate that the Squadron’s Malaysian history should not be forgotten and that the efforts and achievements of 3SQN and its members between 1958 and 1986 be recognised for years to come. 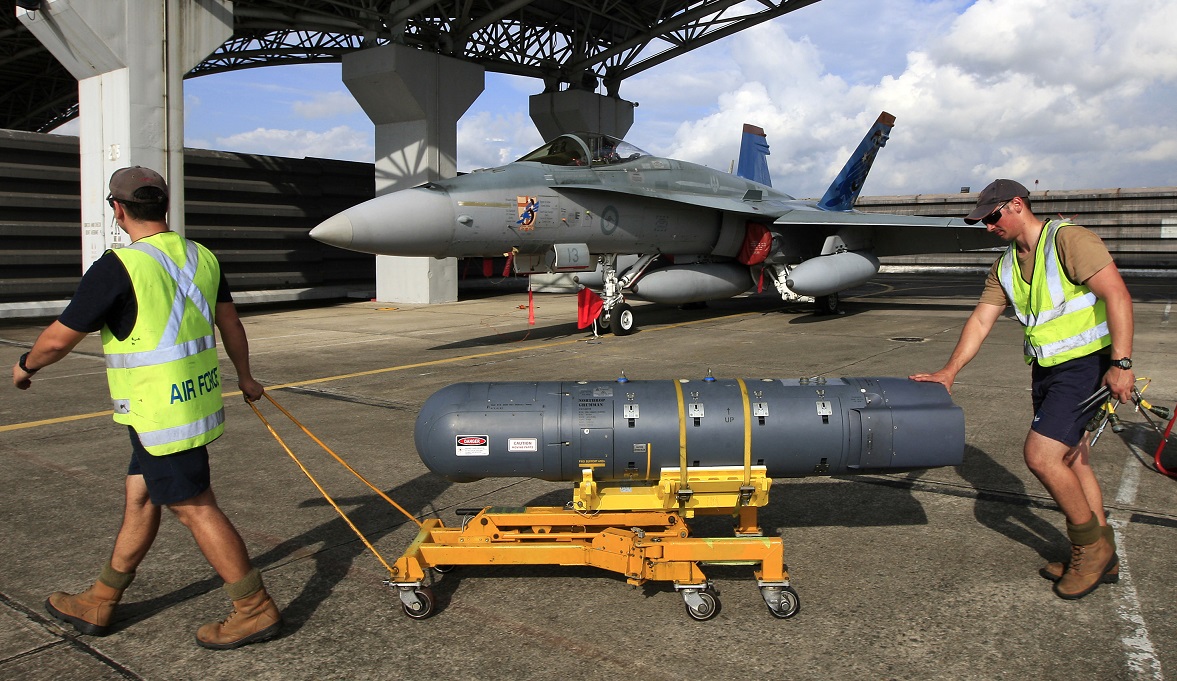 Corporals Aaron Jorgenson and Joshua Newbon, both Avionics Technicians from No 3 Squadron, walk back to the flightline after removing a Litening Pod from an F/A-18 Hornet during Exercise Bersama Padu 2010.  [Photo: Defence News]